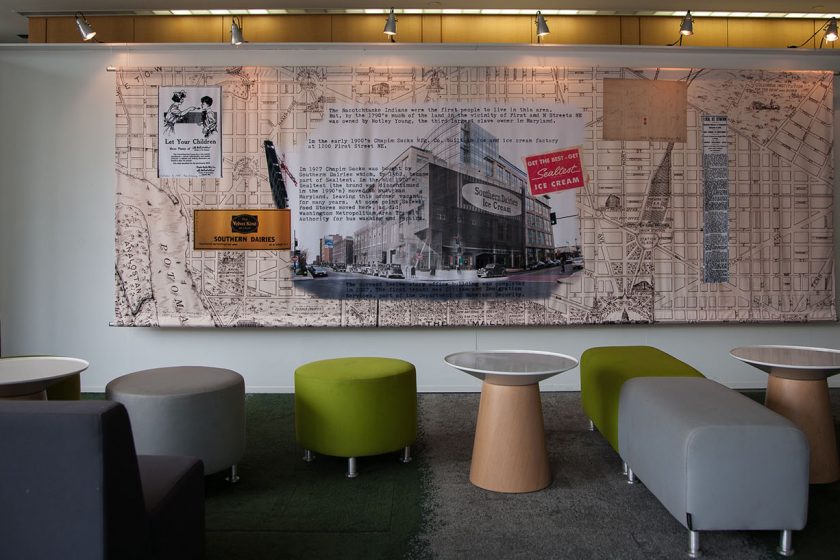 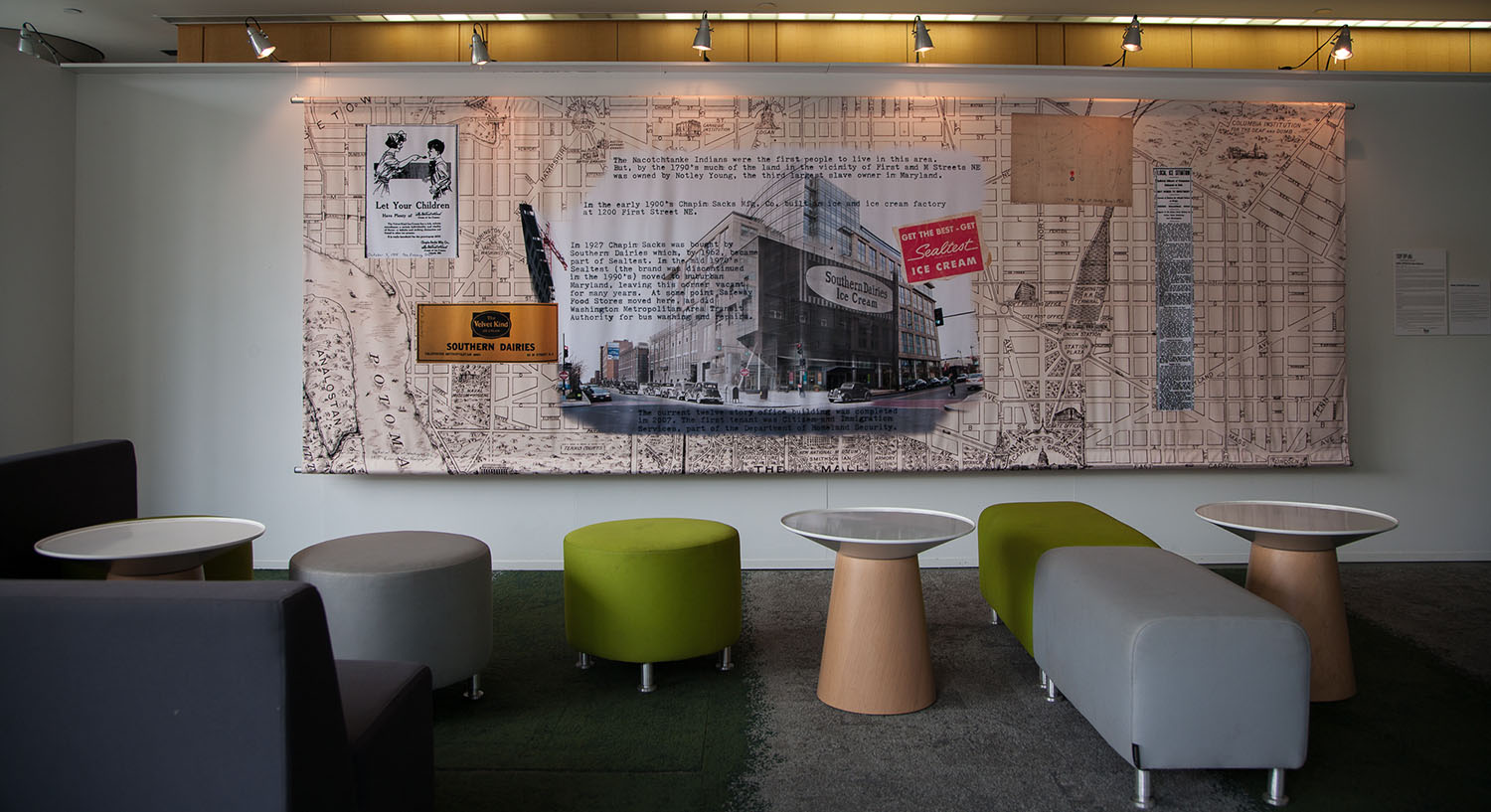 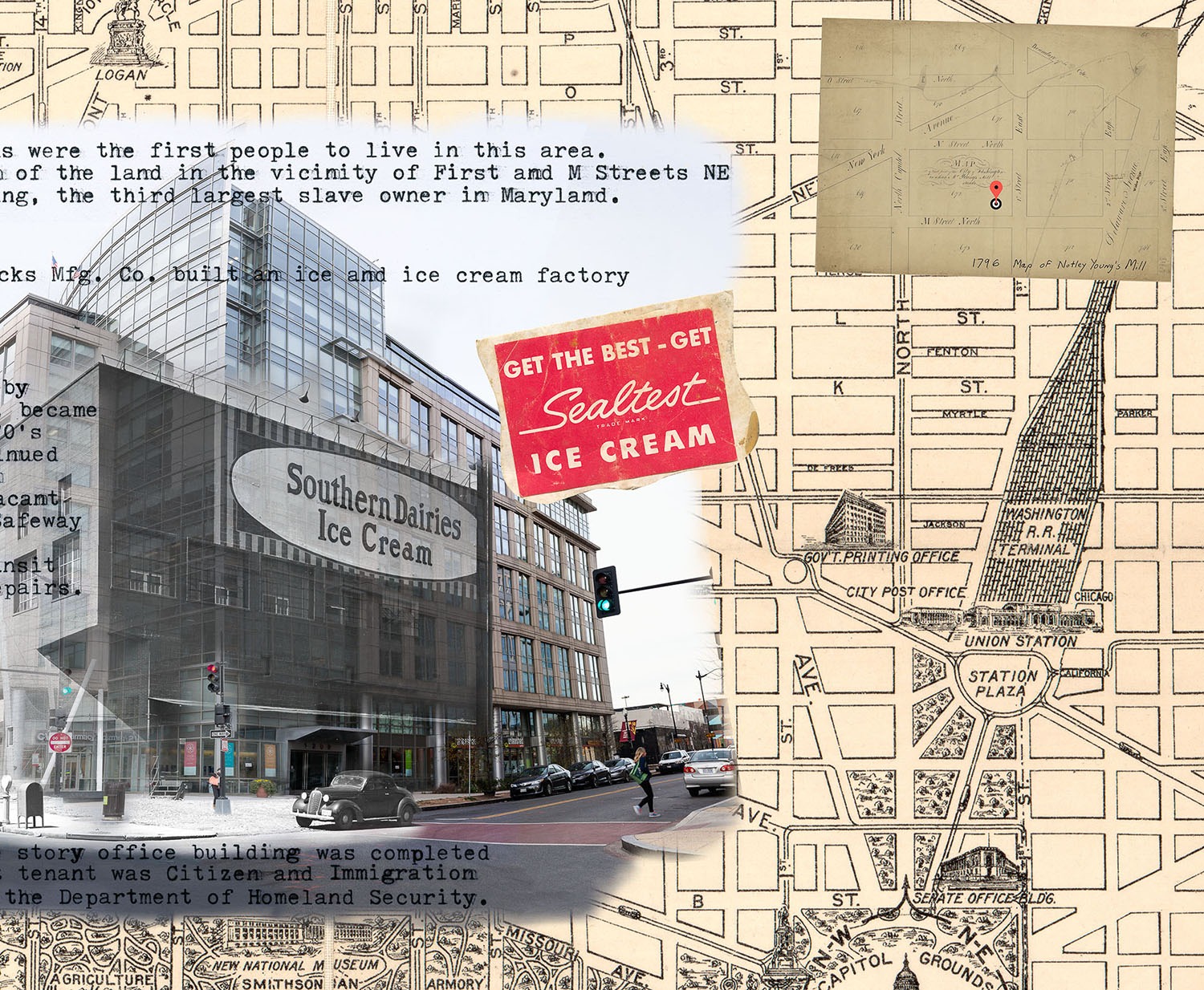 Photography is inherently about time. With the click of a shutter, a moment is seized but the image captured has passed. Using images and text, my work observes and inspects various aspects of time. The passing of time is, of course, something that we experience in our daily lives outside of photography. We remember loved ones who are no longer with us, watch physical objects degrade, experience our own health fluctuating, and live our lives in the present. If we are in a city, we watch it evolve and change as a result of shifting societal values, desires, government actions, and market forces. In urban areas, the past coexists and informs the present.

This site-specific artwork uses a time-dependent medium to specifically address the passing of time. It is an unsentimental look at the history of 1200 First Street NE, Washington, DC. I created it by blending archival and contemporary photographs, incorporating text from historical newspaper articles, maps, and advertisements, and then integrating text into the image. The layers of various opacities are intended to convey a fluid sense of time and place.

A brief history of 1200 First Street NE: The Nacotchtanke Indians were the first people to live in the area. By the 1790’s, however, Notley Young owned much of the land and built a mill nearby at M and Second Street NE. Young owned 265 slaves. He was one of fifteen men whose lands formed the Nation’s Capital.

In the early 1900’s the area now known as NoMa was primarily industrial. Chapin Sacks Mfg. Co. built an ice factory here in 1905 and with a 1908 addition they started manufacturing ice cream and became one of the biggest such factories in the country. Over time it experienced several changes in ownership. It gradually became part of larger organizations—Southern Dairies, then Sealtest, and finally Kraft Foods.

By 1976, like many other commercial operations, the company relocated to suburbia, specifically Landover and Rockville, Maryland. At some point Safeway Food Stores and the Washington Metropolitan Area Transit Authority (WMATA) moved here for their bus washing and repairs, along with an auto body repair shop and International Limousine, Inc. The twelve-story office building now on this site was completed in 2007, reflecting the local and national trends of increasing land values in urban areas.

Time, our perception of it, and memory are important and unifying elements in my work. I have created other photo-collages examining the cultural history of specific sites in Washington, DC, and Arlington, Virginia. Like those collages, this project reflects this region’s local history and is also emblematic of shifting land use in changes to many cities throughout the United States.

Special thanks to NoMa BID

Read Claudia Rousseau’s review in East City Art
To view a list of Rebhan’s sources click here.
For more information on the project go to Washington Project for the Arts – Gail Rebhan